There have been three reports of chloroquine overdose, two from Oman and one from the Netherlands. The two reports from Oman were similar to previously published reports of chloroquine overdose associated with cardiac dysfunction, confusion, and coma; both patients had standard treatment with activated charcoal, diazepam infusions, and positive inotropic drugs, and both survived.

The single case report from the Netherlands gave pharmacokinetic measurements performed before, during, and after hemoperfusion. This showed that hemoperfusion extracted very little chloroquine and was unlikely to be of any use in chloroquine overdose, as would be expected from the high protein binding and large volume of distribution of chloroquine. In Zimbabwe, cases of poisoning by a single agent were identified in a retrospective hospital record review. The mortality rate from chloroquine poisoning was significantly higher than from poisoning with other drugs 5.

Electrocardiographic changes, comprising altered T waves and prolongation of the QT interval, are not uncommon during high-dose treatment with chloroquine. The clinical significance of this is uncertain. With chronic intoxication, a varying degree of atrioventricular block can be seen; first-degree right bundle branch block and total atrioventricular block have been described.

Symptoms depend on the severity of the effects: syncope, Stokes-Adams attacks, and signs of cardiac failure can occur. Cardiac complications can prove fatal in both chronic and acute intoxication. Third-degree atrioventricular conduction defects have been reported in two patients with rheumatoid arthritis after prolonged administration of chloroquine. Long-term chloroquine can cause cardiac complications, such as conduction disorders and cardiomyopathy restrictive or hypertrophic , by structural alteration of the interventricular septum.

Thirteen cases of cardiac toxicity associated with long-term chloroquine and hydroxychloroquine have been reported in patients with systemic autoimmune diseases.

The cumulative doses were g for chloroquine and g for hydroxychloroquine. A year-old woman with systemic lupus erythematosus took chloroquine for 7 years cumulative dose g. She developed syncope, and the electrocardiogram showed complete heart block; a permanent pacemaker was inserted. 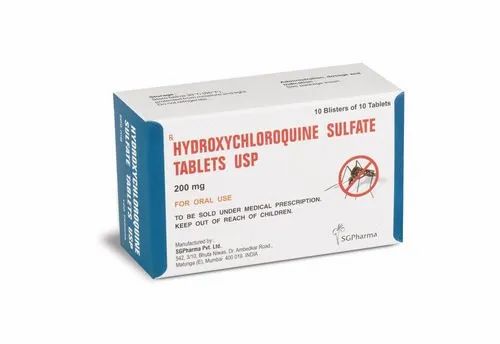 The next year she presented with biventricular cardiac failure, skin hyperpigmentation, proximal muscle weakness, and chloroquine retinopathy. Coronary angiography was normal. An echocar-diogram showed a restrictive cardiomyopathy. A skeletal muscle biopsy was characteristic of chloroquine myopathy.

Chloroquine was withdrawn and she improved rapidly with diuretic therapy. Chloroquine cardiomyopathy occurred during long-term 7 years treatment for rheumatoid polyarthritis in a year-old woman, who had an isolated acute severe conduction defect, confirmed by histological study with electron microscopy.

Regular cardiac evaluation should be considered for those who have taken a cumulative chloroquine dose of g, particularly elderly patients. More than one mechanism may underlie the cardiac adverse effects of chloroquine. Severe hypokalemia after a single large dose of chloroquine has been documented, and some studies show a correlation between plasma potassium concentrations and the severity of the cardiac effects.

Light and electron microscopic abnormalities were found on endomyocardial biopsy in two patients with cardiac failure. After 2 weeks he developed fever, a diffuse papular rash, dyspnea, and sputum. A chest X-ray showed peripheral pulmonary infiltrates. He improved on withdrawal of chloroquine and treatment with cefpiramide and roxithromycin.

No organism was isolated. A subsequent oral challenge with chloroquine provoked a similar reaction. The incidence of serious nervous system events among patients taking chloroquine for less than a year has been estimated as one in 13 Chloroquine, especially in higher doses, can cause a marked neuromyopathy, characterized by slowly progressive weakness of insidious onset.

In many cases this weakness first affects the proximal muscles of the legs. Reduction in nerve conduction time and electromyographic abnormalities typical of both neuropathic and myopathic changes can be found.

Histologically there is a vacuolar myopathy. The symptoms can be accompanied by other manifestations of chloroquine toxicity. A spastic pyramidal tract syndrome of the legs has been reported. In young children the features of an extrapyramidal syndrome include abnormal eye movements, tris-mus, torticollis, and torsion dystonia. Chloroquine can cause seizures in patients with epilepsy. The mechanism is uncertain, but it may include reductions in inhibitory neurotransmitters and pharmacokinetic interactions that alter anticonvulsant concentrations.

Tonic-clonic convulsions were reported in four patients in whom chloroquine was part of a prophylactic regimen. Antiepileptic treatment was required to control the seizures. None had further seizures after withdrawal of the antimalarial drugs. Chloroquine and desethylchloroquine concentrations have been studied in Kenyan children during the first 24 hours of admission to hospital with cerebral malaria.

Of the children had received chloroquine before admission. Blood chloroquine and desethylchloroquine concentrations were no higher in children who had seizures than in those who did not, suggesting that chloroquine does not play an important role in the development of seizures in malaria. A year-old woman had a generalized convulsion 24 hours after returning from a trip to Vietnam. She had a history of partial complex seizures controlled with carbamazepine due to a previous ruptured cerebral aneurysm.

A blood film was negative for malaria. A CT scan of the brain showed changes compatible with the previous hemorrhage. She was successfully treated with clobazam dose not stated until withdrawal of chemoprophylaxis. The interaction between chloroquine and carbamazepine was not examined. Chloroquine should not be given to adults with a history of epilepsy. Chloroquine-induced neuromyopathy is a complication of chloroquine treatment of autoimmune disorders or long-term use of chloroquine as a prophylactic antimalarial drug.

Acute mania has also been recognized. The mental changes can develop slowly and insidiously. Subtle symptoms, such as fluctuating impairment of thought, memory, and perception, can be early signs, but may also be the only signs.

The symptoms may be connected with the long half-life of chloroquine and its accumulation, leading to high tissue concentrations. Chloroquine also inhibits glutamate dehydrogenase activity and can reduce concentrations of the inhibitory transmitter GAB A. In some cases with psychosis after the administration of recommended doses, symptoms developed after the patients had taken a total of 1.

Most cases occurred during the first week and lasted from 2 days to 8 weeks. Transient global amnesia occurred in a healthy year-old man, 3 hours after he took mg chloroquine. Recovery was spontaneous after some hours. In one center, toxic psychosis was reported in four children over a period of 18 months. The children presented with acute delirium, marked restlessness, outbursts of increased motor activity, mental inaccessibility, and insomnia.

One child seemed to have visual hallucinations. In each case, chloroquine had been administered intramuscularly because of fever. The dosages were not recorded. The children returned to normal within 2 weeks.

Hypoglycemia was reported in a fatal chloroquine intoxication in a year-old black Zambian male. Hypoglycemia has also been seen in patients, especially children, with cerebral malaria. Further studies have shown that the hypoglycemia in these African children was usually present before the antimalarial drugs had been started; in a study in Gambia hypoglycemia occurred after treatment with the drug had been started, although it was not necessarily connected with the treatment.

Hypoglycemia is amenable to treatment with intravenous dextrose or glucose, which may help to prevent brain damage. Although hydroxychloroquine has been used to treat porphyria cutanea tarda, there are reports that it can also worsen porphyria. Plasma potassium varied directly with the systolic blood pressure and inversely with the QRS and QT intervals. Plasma potassium varied inversely with the blood chloroquine. Chloroquine inhibits myelopoiesis in vitro at therapeutic concentrations and higher. In a special test procedure, a short-lasting anti-aggregating effect could be seen with chloroquine concentrations of 3.